|  SIGN IN
We need a transformative plan for this climate crisis - Throne Speech Response
by Veronique Veronique | September 25, 2020

On Wednesday, the federal government launched it's throne speech - a high level summary of its plans. 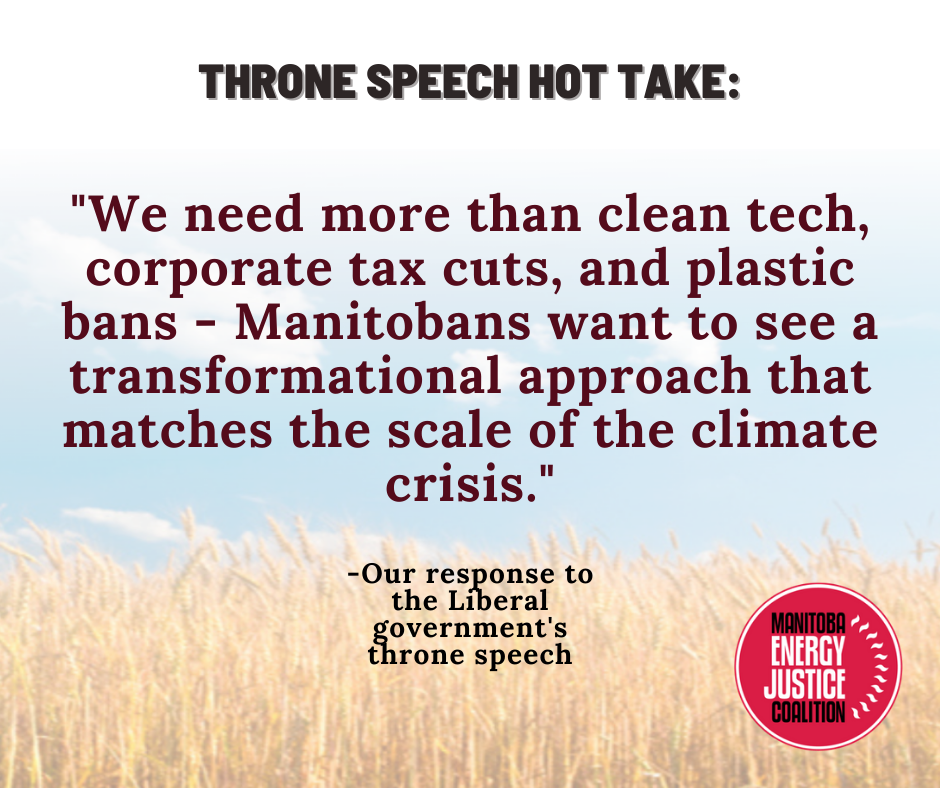 We need to see so much more to match the scale of the climate emergency--a transformational approach, as Climate Action Network says.

We need more than clean tech, corporate tax cuts, and plastic bans---Manitobans want to see a transformational approach that matches the scale of the climate crisis.

Now’s the time for a plan to deal with the climate emergency by committing to good jobs, Indigenous rights, and social and economic justice--in the form of a Green New Deal.

We’d also love to see the government talk about what it will NOT do---starting with halting the TransMountain pipeline and halting all oil & gas subsidies.

Below read some of what the government said they'll do (in bold) and our hot takes for each:

“The Government will immediately bring forward a plan to exceed Canada’s 2030 climate goal” and “legislate Canada’s goal of net-zero emissions by 2050”:

“Climate action will be a cornerstone of our plan to support and create a million jobs across the country.”

"Support manufacturing, natural resource, and energy sectors as they work to transform to meet a net zero future, creating good-paying and long-lasting jobs”

Our Response: we would love to see a million climate jobs, especially in low-carbon work, manufacturing, and renewable energy! We’re suspicious that this could also mean giving money to oil & gas or to the nuclear energy sector. And we want these jobs and projects to be good unionized public sector jobs.

“The Government will launch a new fund to attract investments in making zero-emissions products and cut the corporate tax rate in half for these companies to create jobs and make Canada a world leader in clean technology.”

Our Response: Corporate tax cuts and private sectors jobs just allows money to flow to CEOS and shareholders instead of workers--can we put this money towards creating public jobs and new crown corporations instead?

And make zero-emissions vehicles more affordable while investing in more charging stations across the country.

Our Response: a wealth tax would be a better way to do this. We also need to address corporate tax avoidance by everyone, not just those digital giants.

Our Response: everyone has already had their fun at the idea that this is a meaningful form of climate action the first time these promises were made...nothing much more to be said.

The Government will move forward to introduce legislation to implement the United Nations Declaration on the Rights of Indigenous Peoples before the end of this year.

Our Response: Do it!