Yesterday, the Trudeau government joined 130 other countries on the world stage to  ratify the Paris Agreement -- and in doing so, pledge to limit global warming to 1.5°C.

Then, immediately afterwards, the government launched a country-wide public consultation process on a national climate strategy. We know that powerful interests like the fossil fuel industry will be at the government’s doorstep, lobbying for the weakest climate action strategy possible. That’s why it will be up to us to be there, every step of the way, showing up and speaking up for bold climate action that works for people and the planet.

Are you ready to stand up for climate action that works for us? Click here to join the People’s Climate Plan.

We have a plan to organize locally in Winnipeg and across the country to demand an ambitious climate strategy. We are partnering with LeadNow,350.org, Council of Canadians and many other groups to build a plan that’s built around three fundamental principles:

Any national climate strategy must reflect these ambitious values if we want Canada wants to respect the global commitments it is making on the world stage.

We’ll do it in three stages.

1. First, we’ll organize our local communities to demand that our Members of Parliament hold fair and inclusive climate consultations in their ridings.

2. Next, we’ll speak up together the government consultations in our local communities. In ridings where MPs refuse to hold consultations, we’ll hold our own.

3. Then, this Fall, we’ll mobilize en-masse right as the government unveils its national climate strategy, to send one last message on where the people stand. 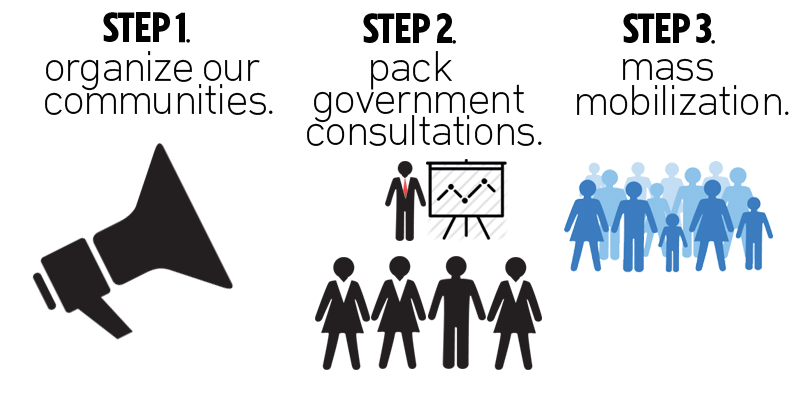 We can make a just, and ambitious climate action a reality. It’s up to us.

Sign up to speak up for the People’s Climate Plan!

We have a huge capacity to impact this consultation here in Manitoba. Not only are there 7 Liberal MPs in Winnipeg, but one of them is Minister of Natural Resources Jim Carr - who stands as one of the loudest pro-fossil fuel voices in the Liberal government.

The first step to joining the People's Climate Plan in Winnipeg is to attend our orientation session on May 5th. Click here to attend the orientation.

We know that when we stand together, we make big things happen.