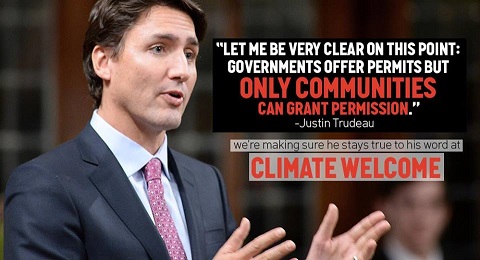 With Justin Trudeau decisively anointed the prime minister-elect by a crimson wave, the country has waived goodbye to 10 years of Conservative majority rule and now has to reckon with the leftovers. The Conservatives have left a completely gutted environmental review process of pipelines and tar sands infrastructure, leaving pipeline projects stuck in review within a National Energy Board process which is fundamentally flawed.  Under a new government there is some reason to be optimistic, though we have our work cut out for us and must remain diligent, in the short and long term, to ensure the Prime Minister is held accountable to his bold and promising campaign declarations.

The Liberal's environmental platform states they will undertake an immediate review of environmental assessment processes, speaking specifically and directly as to the NEB by stating they will ensure that its composition has sufficient expertise in fields like environmental science, community development, and Indigenous traditional knowledge - in accordance with constitutional and international human rights obligations, including Aboriginal and Treaty rights and the United Nations Declaration on the Rights of Indigenous Peoples; and that  its composition reflect regional views, as well as include an analysis of upstream impacts and greenhouse gas emissions resulting from projects under review.

But we all know that what is promised during elections doesn't necessarily hold its mustard. Specifically concerning are influences in Trudeau's immediate inner-circle: His campaign co-chair was a TransCanada insider, and his campaign was supported by other TransCanada salesmen, such as Phil Fontaine. With these counter-forces in mind we must be firm in our demand for accountability to these promises, by asking for immediate action.

What might that action look like?  In just 40 days our new prime minister will be headed to Paris for the most important round of climate change talks ever in the history of humanity.  This is a monumental opportunity for Canada to re-instate itself as an inspiring leader in the climate change movement. In order to do this, we ask Prime Minister Trudeau to act with integrity by implementing the changes on which he ran his campaign – beginning with calling for an immediate freeze to all new tar sands development, and a suspension of all current pipelines review processes until the laws, policies and practices of the current NEB process are reviewed, and the necessary changes implemented.   We trust that if these campaign promises are kept and the NEB process is refined, the democratic scientific truth will prove the contradiction of continuing oil sands development and pipeline building with being able to have a stable climate.

This is the short term, repairing the Conservative legacy.

Real change requires long-term initiatives, and could lead to an environmentally positive Liberal legacy. Once the environmental review process changes prove the oil sands unfeasible in view to reducing greenhouse gas emissions and climate change, we need to be able to provide suggestions towards alternatives – addressing the further Liberal campaign promises of investments in clean infrastructure and technologies.   Some suggestions for strategy include investment in local decentralized green power sources spurred by a nation-wide assessment of the true costs of carbon detriment, raising the price of fossil fuels to reflect the true cost. Each public provincial power utility could institute the transition away from fossil fuel heating by making the price of heating with natural gas or oil higher than those from electrical sources such as solar, heat pumps, batteries, geothermal, and electric furnaces. The utilities could offer low or zero interest loans to cover the initial capital cost of the transition. Incentives could also be offered for insulation and passive solar construction.  We are in a climate crisis and it's time to wake up and do something about it. The solutions exist. Let's ask the new Liberal government for a Canada we can, once again, be proud of - a Canada which refuses to continue contributing to the problem and takes a lead in the transition away from fossil fuels with a view to long-term renewable energy development.

With these short and long-term desires in mind MEJC is sponsoring a contingent of youth and students to participate in 350.org’s Climate Welcome, a series of peaceful and non-violent acts to welcome Mr Trudeau to office. Locally, we will be helping people to pressure and lobby their new Liberal MPs to encourage Mr Trudeau to take bold and decisive action on climate. For Manitobans worried about the risks to water and climate posed by the Energy East pipeline, these are the most crucial ways we can act in the near future. We only have 40 days until the Paris climate talks, we have 40 days to begin to repair the last decade of Canada’s climate policy.

Energy democracy is about free, prior, and informed consent of communities to resource development.  A new energy project review process must include the implementation of the United Nations Declaration on the Rights of Indigenous Peoples (UNDRIP) ensuring the rights and title of Indigenous People are addressed; a climate test which includes the cumulative effects of all tar sands development including upstream impacts and greenhouse gas emission , and full funding for citizens and municipalities to participate ensuring that citizens are able to not only engage but have the power to say no to energy projects, and finally a long-term strategy must be put into place so we can all begin to act towards Real Change.

If you want to be part of the exciting and growing movement for climate justice please email us: [email protected] or follow us online.

For a stable climate,